Home » GENERA M-O » Microloma » Microloma namaquense flowers
Back to Category Overview
Total images in all categories: 9,419
Total number of hits on all images: 4,233,015 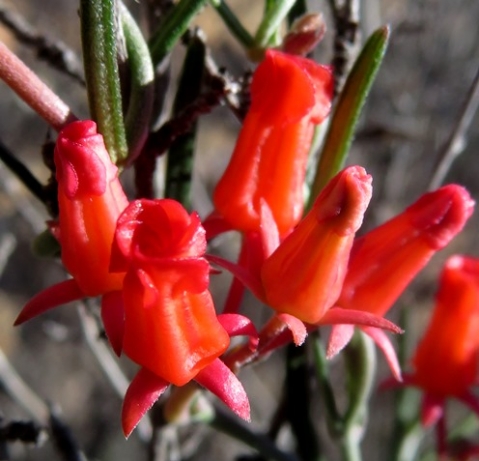 The stalked, smooth flowers of Microloma namaquense grow in lax clusters of three to six outside the leaf axils.

The five, pointed sepals are purplish red, separated near the base and spreading below the erect corolla. The corolla is five-angular, scarlet on its outside and tapering from its flat base to the tip where the rounded, bright to pinkish red lobes spiral clockwise around the mouth. The flowers are 6 mm to 8 mm long.

The petal lobes appear to close the flower mouth but in a different way to before they “opened”.