Home » TYPES » Climbers » Galium tomentosum
Back to Category Overview
Total images in all categories: 11,131
Total number of hits on all images: 5,812,387 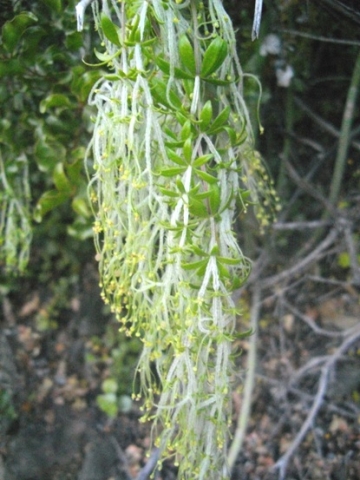 Galium tomentosum, commonly known as old man’s beard and in Afrikaans as kleefgras (clinging grass) or rooivergeet (red forget), is a perennial herb, a shade plant that scrambles into surrounding vegetation to heights of 3 m. The twining stems may cover a supporting plant quite comprehensively. Where the soft branches grow beyond the available support, they droop.

The distribution of the species covers much of the southern parts of South Africa as far north as the Free State, as well as parts of Namibia.

The plant is found in many habitats, often in sandy soil on flat ground and lower slopes, in kloofs and seasonal watercourses, but not in fynbos. The species is not considered to be threatened in its habittat early in the twenty first century (Vlok and Schutte-Vlok, 2010; Bond and Goldblatt, 1984; Shearing and Van Heerden, 2008; http://redlist.sanbi.org).