Home » TYPES » Climbers » Dipogon lignosus
Back to Category Overview
Total images in all categories: 11,923
Total number of hits on all images: 7,173,496 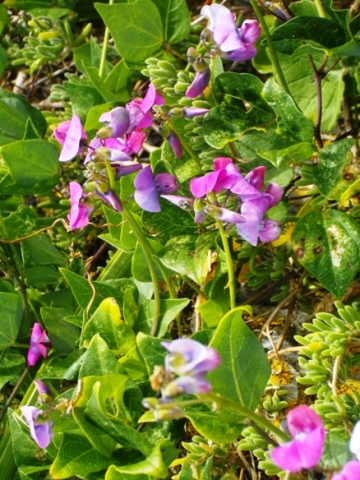 Dipogon lignosus, the Cape sweet pea, is a fast growing South African climbing plant. It is monotypic, there being only the one species in its genus. An earlier name was Dolichos gibbosus. Lignosus refers to this woody base.

The leaves are trifoliolate on long stalks. The leaflets are ovate to rhombic, the base rounded and the tip acutely pointed. The plant is semi-evergreen, i.e. occasionally deciduous, its water needs moderate. The flowers have roughly the shape of pea-flowers, the plant belonging to the Fabaceae family.

The species habitat is coastal forest and scrubland from Saldanha in the Western Cape to the Amatola Mountains in the Eastern Cape. Climbing on what support may be on offer, it grows branched, soft stems of about 2 metres from a woody base. The species is not considered to be threatened in its habitat early in the twenty first century.

This species has caused some invasive mischief in Australia and maybe elsewhere, as one of its common names, mile-a-minute vine, might suggest (Manning, 2007; Bean and Johns, 2005; Gledhill, 1981; www.plantzafrica.com; www.redlist.sanbi.org).