Home » TYPES » Climbers » Cysticapnos vesicaria leaves
Back to Category Overview
Total images in all categories: 11,921
Total number of hits on all images: 7,169,276 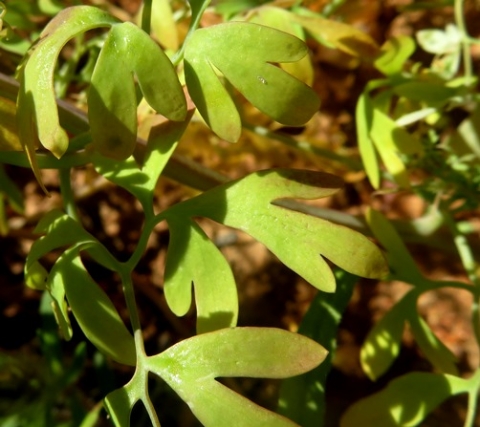 Cysticapnos vesicaria leaves appear compound while clearly lobed, deeply and asymmetrically. The leaf lobes are obovate or narrowly elliptic with entire margins and bluntly pointed tips. The leaves are soft and thinly textured, hairless and here yellow-green in colour suffused with faint red in some areas.

The photo was taken south of Vanrhynsdorp near the southern boundary of the distribution of subsp. namaquensis that grows more flowers and larger ones. Presumably there are no great leaf differences between subsp. vesicaria, the more widely distributed subspecies, and subsp. namaquensis. The subspecies of the plant in picture has not been determined.

The species has generated interest in research about evolutionary development in plants. Features of certain plants make such explorations easier than those of plants in general (Vlok and Schutte-Vlok, 2015; Leistner, (Ed.), 2000; Manning, Goldblatt and Forrest (2009): A Revision of Fumariaceae (Fumarioideae) in southern Africa including naturalized taxa. Bothalia, 2009 39(1) pp. 47-65; Leistner, (Ed.), 2000; iNaturalist; https://www.ncbi.nlm.nih.gov).