Home » TYPES » Climbers » Cysticapnos vesicaria subsp. vesicaria
Back to Category Overview
Total images in all categories: 11,506
Total number of hits on all images: 6,502,793 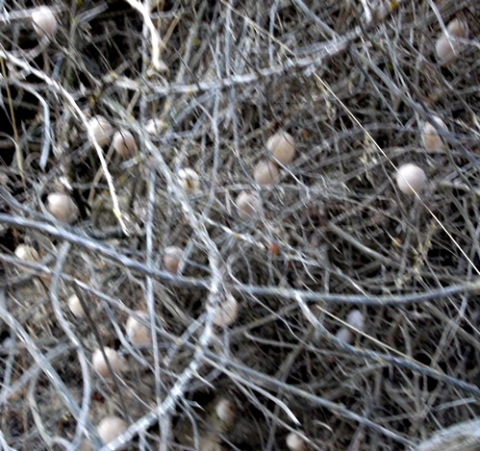 The stalked leaves are deeply or shallowly lobed, the variable lobes elliptic and pointed with entire margins. Some of the leaves grow tendrils facilitating attachment to adjacent plants or other supports. Leaf texture is soft, the colour grey-green, becoming 5 cm long.

The two-lipped flowers are white and pink, about 5 mm long, growing in short racemes. The scale-like sepals are much shorter than the petals. The petals are free at the base. The six stamens occur in two groups. Flowering happens late in winter and in spring.

The species is distributed in the west of South Africa, from Namibia in the north to Bredasdorp and the Little Karoo. The habitat is the shade of shrubs into which the plants climb. The plant occurs at lower slopes and sandy flats among various vegetation types, but usually not in fynbos. It is not considered to be threatened in its habitat early in the twenty first century.

C. vesicaria subsp. namaquensis occurs in the Northern Cape in Namaqualand. There are five species in this southern African genus, all soft, annual, climbing herbs. It forms part of the Fumariaceae or poppy family (Vlok and Schutte-Vlok, 2010; Leistner, (Ed.), 2000; iSpot; www.redlist.sanbi.org).