Home » TYPES » Climbers » Cliffortia odorata
Back to Category Overview
Total images in all categories: 10,851
Total number of hits on all images: 5,501,669 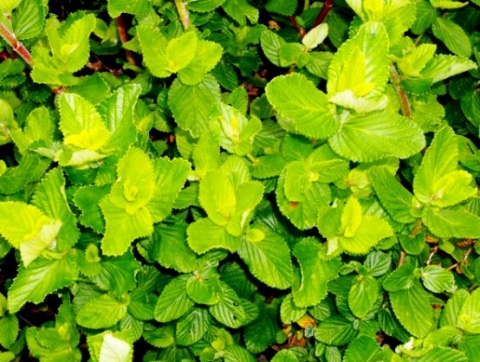 Cliffortia odorata, the wildewingerd (wild vineyard) in Afrikaans, is a scrambling shrub that grows many vines to 1 m. The young stems are hairy and slightly pink, but later become hairless and rust brown.

The leaves are alternate with stipules at the base of the short petioles. Leaf shape is ovate with serrated margins. The leaf is aromatic, dark to yellow green, leathery and hairy only on the lower surface. The leaf surface is covered in parallel, straight lateral veins that are closely spaced and emerging at an angle from the midrib. These veins are conspicuously indented on the upper surface and run straight into the margins. They give the leaf a resemblance to that of Berchemia zeyheri, the red ivory tree.

The leaves of C. odorata have a variety of medicinal uses in traditional medicine with recognition of some of its properties in modern pharmacology.

The flowers are small and inconspicuous, borne in the leaf axils. The plant may flower throughout the year except in autumn.

The wildewingerd grows on mountain slopes of the Western Cape, the Eastern Cape and KwaZulu-Natal in places where moisture is readily available. The species is not considered to be threatened in its habitat early in the twenty first century (Bond and Gold, 1984; www.plantzafrica.com; http://redlist.sanbi.org).