Home » TYPES » Climbers » Cissus quadrangularis coloured stem
Back to Category Overview
Total images in all categories: 12,068
Total number of hits on all images: 7,363,090 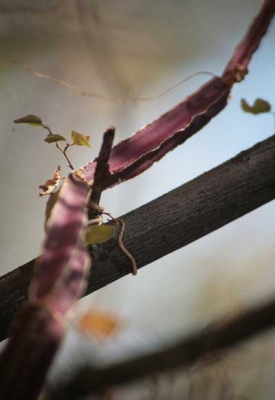 Cissus quadrangularis or devil's backbone was known in ancient Indian medicine for the treatment of bone ailments and the setting of broken bones. Some modern research indicates potential in the treatment of obesity as well.

While at least one other plant has also been named devil's backbone and the name used variously elsewhere, it is ironical in the case of a plant useful to people. Maybe the name is associated with the poorly understood nature of the medical benefit when first discovered, as if a cure so miraculous must have a dark source.

Could the natural distribution areas of this plant in Africa and Asia have been connected through geographic migration corridors in the distant past?

The stem in picture is purplish, unlike the green stems often seen. The rectangular stems ramble through other plants and grow to a size that presents a heavy weight to carry to such hosts (www.mrsupplement.com.au).