Home » TYPES » Climbers » Cissampelos capensis
Back to Category Overview
Total images in all categories: 12,086
Total number of hits on all images: 7,380,903 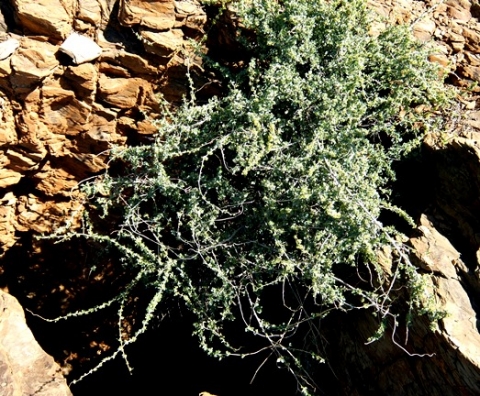 Although Cissampelos capensis is usually a shrub, it may sprawl over rocks or twine into adjacent shrubbery. The many stems (with no tendrils) tend to become a tangled mass or reach for more around it.

The sought-after root, much used in traditional medicine, becomes 2,5 cm in diameter. It is covered in grey-brown bark.

The plant may be confused with Zehneria scabra, a plant from the Cucurbitaceae or cucumber family, also sharing the dawidjieswortel common name with C. capensis; but that plant grows spirally coiled tendrils.

C. capensis has a very diverse and extended set of medicinal applications, including treatment for snakebite, boils, dysentery, kidney stones, spastic colon, some cancers, cholera, diabetes, glandular swellings, syphilis and blood purification. If one adds the purported value as a painkiller, a sedative, a purgative and an improver of memory, its incredible fame as a panacea might well have started at the time when King David is said to have discovered where to dig for it as a shepherd.

Expertise regarding the precise method(s) of correct usage for each ailment is important because plants of this family, maybe even this one, are included on the list of providers of arrow poison.

When such a list of benefits becomes inordinately long, doubt should result in seeking corroborative evidence; especially when discovering that pieces of the root used to be worn as protective charms attached to various body parts (Vlok and Schutte-Vlok, 2010; Van Wyk, et al, 1997; Van Wyk and Gericke, 2000; http://pza.sanbi.org).