Home » TYPES » Climbers » Cissampelos capensis called dawidjieswortel
Back to Category Overview
Total images in all categories: 11,921
Total number of hits on all images: 7,169,078 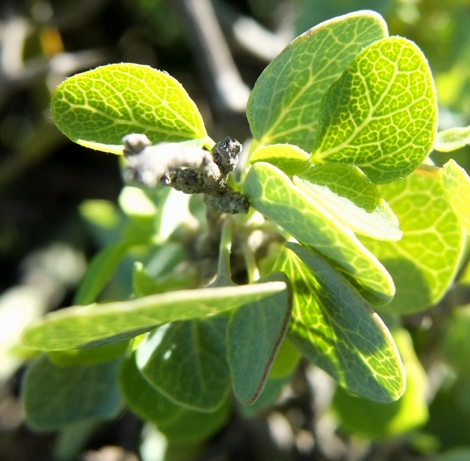 Cissampelos capensis is a shrub that grows to 1,5 cm in height. Its branches often sprawl, sometimes twine.has Afrikaans vernacular names of dawidjieswortel (little David’s root), dawidjies or even dawwetjies.

It is one of several plants named for a mythical root that King David had supposedly known where to dig for, surviving in an Afrikaans idiom (Waar Dawid die wortels gegrawe het), indicating knowledge of what is going on. A descriptive vernacular name also exists in Afrikaans: fynblaarklimop meaning fine-leaf creeper.

The species is distributed widely from Namibia to the Eastern Cape. The lowland habitat in variable vegetation has clay or loam soils. This photo was taken in April in the Little Karoo near Oudtshoorn. The species is not considered to be threatened in habitat early in the twenty first century (Vlok and Schutte-Vlok, 2010; www.plantzafrica.com; www.redlist.sanbi.org).