Home » TYPES » Climbers » Ceropegia fimbriata subsp. geniculata
Back to Category Overview
Total images in all categories: 12,068
Total number of hits on all images: 7,360,587 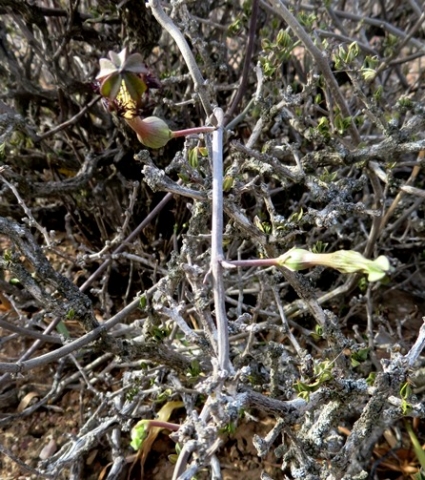 Ceropegia fimbriata subsp. geniculata, previously C. geniculata, is a climbing perennial, a slender vine. The plant has (few) opposite leaves and clear, watery sap like ceropegias in general. They belong to the Apocynaceae family that is usually characterised by milky sap.

The small, ovate leaves of C. fimbriata subsp. geniculata are stalked and have acutely pointed tips, probably rudimentary. The margins curve down and the midrib is sunken.

The subspecies grows in the east of the Western Cape and west of the Eastern Cape, a rare plant of mainly the Little Karoo. It is known to grow (at least) from Oudtshoorn to Ladismith and Van Wyksdorp. The photo was taken on a stony slope near Calitzdorp. The other two subspecies of C. fimbriata occur only in the Eastern Cape.

The habitat of this plant is karoid slopes and flats where the plants live entangled in variable scrub, sometimes including guarri trees and spekboom. The subspecies is not considered to be threatened in its habitat early in the twenty first century.

There are more than 160 Ceropegia species worldwide, mainly in Africa, Asia and Australia. About 50 occur in South Africa, mainly in arid areas. Many ceropegias grow from stem tubers (Vlok and Schutte-Vlok, 2015; Leistner, (Ed.), 2000; Bond and Goldblatt, 1984; https://desert-plants.blogspot.com; http://redlist.sanbi.org).