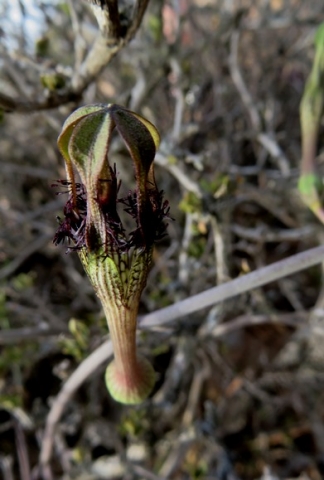 The long-stalked, pale greenish flowers of Ceropegia fimbriata subsp. geniculata has a globose, inflated bulge at the base of its long corolla tube. The tube continues in a funnel-shape until the petals part at the mouth into lobes that re-join in a cage-like superstructure over the tube. The tube exceeds the lobes in length. Longitudinal lines along the outside surface of the corolla deepen in colour near the top of the tube where the petals part into narrow lobes.

The “most floral” part is here in the centre of the corolla, at the base of the petal lobes where they are narrowed into struts. Dark maroon in colour, the lobe margins are ciliate with long appendages. Inside the corolla reside a five-part outer corona and an inner, lobed corona. The anthers have two locules.

Flies are the typical pollinators, becoming temporarily trapped in the bulbous base of the corolla. Thorough movement ensues, allowing ample contact with the significant parts for up- and offloading of pollen.

The fruit follicles are paired and spindle-shaped.

The photo was taken in September; flowering probably continues through summer to early autumn (Vlok and Schutte-Vlok, 2015; Leistner, (Ed.), 2000; Bond and Goldblatt, 1984; https://desert-plants.blogspot.com).