Home » TYPES » Climbers » Ceropegia cimiciodora smelling of bedbugs
Back to Category Overview
Total images in all categories: 12,068
Total number of hits on all images: 7,363,281 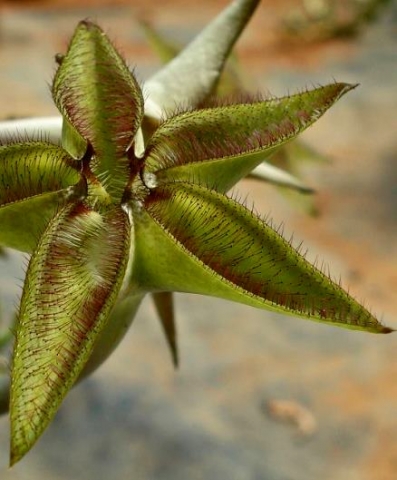 Ceropegia cimiciodora is a succulent, climbing herb growing branched vines to lengths around 3 m. Its leaves are only rudimentary, the stems thickish, sparingly branched and rope-like, thinner in the upper parts where they flower.

The short-stalked flowers grow solitary or in pairs at stem-tips and from stem nodes. The five-lobed, lemon-green corolla is star-shaped, its large lobes spreading from the long, funnel-shaped tube. The lobes have incurving sides and a sparse covering of purplish hairs on their inside surfaces.

Small outer and inner coronas are present in the flower centre. The flower is said to exude an unpleasant odour resembling that of bedbugs. Flowering happens late in spring.

The South African species distribution is disjunct, limited to two regions: Maputaland in KwaZulu-Natal and north of or in the Soutpansberg in Limpopo. It also grows in neighbouring countries including Swaziland.

The habitat is Soutpansberg montane bushveld, savanna and thorn scrub on turf, sandy and loam soils. The species is considered to be vulnerable in its habitat early in the twenty first century due to subsistence crop farming and overgrazing (Pooley, 1998; Letty, 1962; http://redlist.sanbi.org).