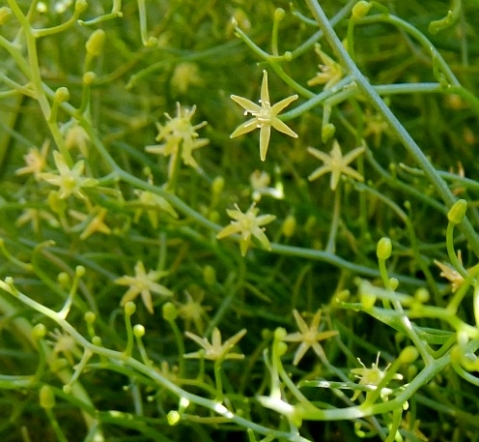 The flowers of Bowiea volubilis subsp. volubilis grow in large, convoluted inflorescences comprising many fleshy, bright green stems that branch and scramble. Each small flower is solitary on a long stalk.

The yellow-green flower, pale and slender, has a six-pointed star-shape formed by its free, narrowly lance-shaped tepals that spread or flex backwards, each tapering to a rounded tip.

The six stamens are also free like the tepals, erect in a ring around the superior ovary visible in the centre; each stamen arising from the base of a tepal. The stamens are tipped with tiny, cream, oblong anthers. The about globular ovary is topped by a short, terete or cylindrical style with a three-lobed stigma at its tip.