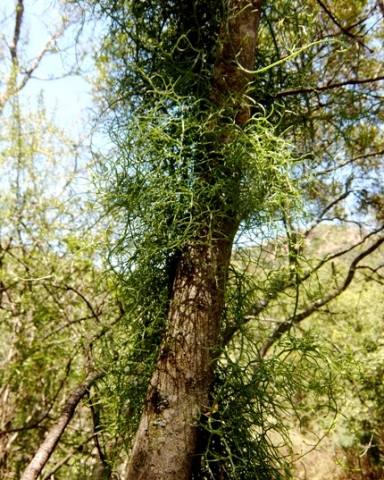 Bowiea volubilis subsp. volubilis displays its climbing capability, having ascend a few metres up a thorn tree in the Walter Sisulu National Botanical Garden. A dense mass of branched stems has formed well above the ground, fed by its bulb that is usually partly exposed above-ground. Where no tree or shrub is available, it would develop a similar wiry mass on the ground or over rocks. The plant copes well in partial shade or dappled sunlight.

The climbing onion has admired ornamental qualities and is planted worldwide. Locally it is sought after for an extensive list of traditional medicinal applications.

Growing it from seed is easy. Do it where possible to help secure the future of this plant in cultivation, as its future in nature is increasingly uncertain (Pooley, 1998; www.plantzafrica.com).