Home » TYPES » Climbers » Bowiea volubilis subsp. volubilis
Back to Category Overview
Total images in all categories: 12,068
Total number of hits on all images: 7,360,737 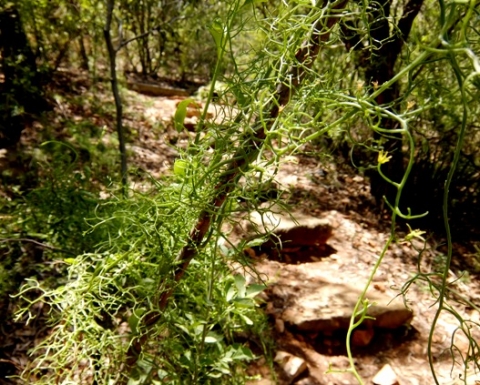 Bowiea volubilis subsp. volubilis, commonly the climbing onion or in Afrikaans the knolklimop (bulbous climber), is a member of the Hyacinthaceae family. When listing poisonous plants, this species features prominently.

The species fits among the bulbous plants as it grows from a large bulb. The soft stems also allow the plant to fit among herbaceous plants, a typical perennial. Another plant category where it fits well, is among the succulents. The plant annually grows a multitude of fleshy green stems. They perform the bulk of the required photosynthetic production functions, as well as the storing of water; on top of what is stored in the bulb itself.

The plant is here grouped with the climbers, as the overwhelming impression of a well-developed plant is the mass of scandent stems that use all available supports to reach sunlight. It grows to 4 m in height.

The distribution of the subspecies lies in the east of South Africa from the Eastern Cape to Limpopo and into tropical Africa, at least as far as Kenya. The habitat is mainly summer rainfall thicket, forest margins, often in rocky or mountainous places, but also along river banks and bushy kloofs. It grows at elevations between 300 m and 2300 m.

B. volubilis subsp. gariepensis grows in the arid west of southern Africa: northern Namaqualand, the Richtersveld and southern Namibia. That subspecies has blue-green stems and white flowers.

Both subspecies are now considered vulnerable in habitat due to excessive collection by those involved in the traditional medicine plant trade (Pooley, 1998; www.bihrmann.com; www.redlist.sanbi.org).