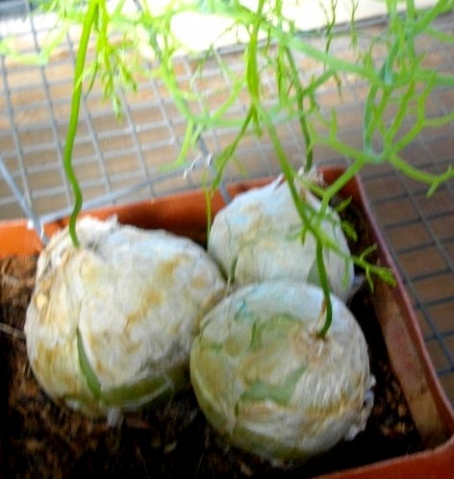 These Bowiea volubilis subsp. volubilis caudices cultivated in the Karoo Desert National Botanical Garden grow largely above-ground. The nearly globular bulb becomes up to 15 cm in diameter. The bulb is comprised of many overlapping scales. The outer scales exposed to sunlight are green, those covered inside remain white.

Plant parts, also the bulbs are highly toxic. Stories of disastrous consequences of cardiac arrest following the ingestion of parts of these plants may linger in the traditional populations where everything conceivable had been tried medicinally over time. Nevertheless, local traditional healers have succeeded in developing remedies for a series of ailments involving parts of this plant in clever ways, avoiding overdose.

This has also happened in the case of countless other indigenous plants in South Africa. An estimate of 4000 southern African plant species feature in some way in medicines of some sort. African medicines coexist beside Western allopathic, homeopathic and herbal ones locally. Similar international bodies of ethnic medicinal knowledge continue to function worldwide, including famous ones in China and India.

And more, B. volubilis subsp. volubilis also offers charm benefits including warrior protection and traveller insurance, to mention some of the physical benefits reaped (mainly in the past) from prophylactic use of the ugibisisila or iguleni, as the Zulus call this plant.

Some secrets concerning methods of preparation and application of medicines continually slip through the cracks, getting lost from the “archives of tradition”. Word of mouth knowledge transmission to educate novice healers is an old, tried and tested system; for long the only source of healing for all our human ancestors of long enough ago.

Such practices remain stable, however, for only so many generations. As discovery and forgetting mould them, they differentiate due to cultural and language divides, also the distances among practitioners. Such orally communicated knowledge is often carried to the last practitioner and then dies from disuse.

Committing such material to systematic recording happens digitally these days, performed via technology unthinkable in even recent generations. The continual reorganisation and integration of data, information and knowledge, remains the hallmark of the preservation part of culture in accumulative human civilisation. The transition from knowledge to wisdom the shakiest part of the progress (Van Wyk and Gericke, 2000; www.plantzafrica.com).