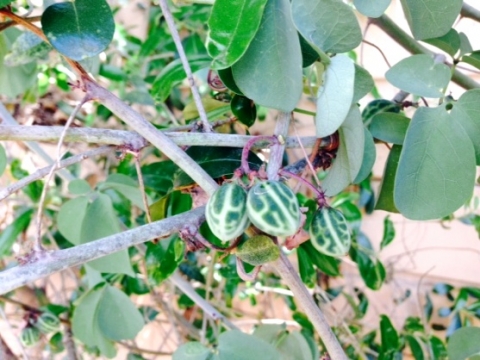 The fruit of Adenia fruticosa subsp. fruticosa is an ellipsoid capsule that becomes as big as 2 cm in diameter. It has a smooth surface and leathery skin. Seen here in the unripe stage, the fruits have slightly pointed tips and a dark green colour. There are conspicuous creamy white stripes along the fruit surface, the main ones possibly coinciding from back to front with the capsule segments. Secondary lines have angled or curved shapes and branches. Fruits are only found on female plants of this dioecious species.

The flowers are greenish and bell-shaped, growing in cymes from leaf axils at the end of winter and early spring. The male flowers growing in groups of up to five are bigger than the female ones, up to 8 mm long; the female ones develop solitary, in pairs or groups of three.

This plant is found in the Burgersfort, Chuniespoort and Sekhukhuneland regions of Limpopo and Mpumalanga. It grows in thorny bushveld on rocky slopes in well-drained, sandy or granite soil. The subspecies is considered to be near threatened in its habitat early in the twenty first century due to agriculture, human settlements and use in traditional medicine.