Home » TYPES » Climbers » Acanthosicyos naudinianus green fruit
Back to Category Overview
Total images in all categories: 11,894
Total number of hits on all images: 7,134,662 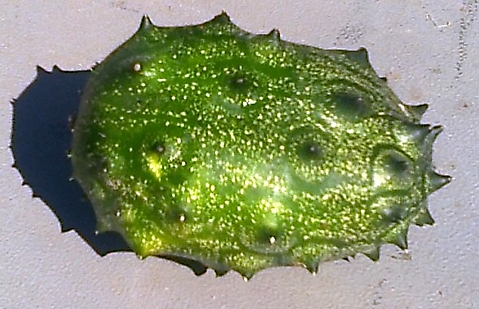 Acanthosicyos naudinianus, commonly the gemsbok cucumber or wild watermelon, is a much-branched, perennial. It grows long, trailing stems from a fleshy, white rootstock, up to 1,5 m deep in the sand.

The alternate, stalked leaves are deeply, divided into five long, narrow lobes, radiating palmately from the leaf-base. Small, lateral lobelets grow irregularly from the straight, main lobes. The blades are dark green to blue-green, covered in stiff hairs. The whitish lobe midribs are conspicuous on top, prominent below.

The yellow flowers of the dioecious species (male and female flowers on separate plants), grow in summer on long peduncles from leaf axils. The five oblong petals on a five-lobed calyx form a shallow, central corolla bowl, before they spread to squarish tips. Female plants have somewhat leathery petals, also staminodes representing the stamens of male flowers.

The fruits are roasted and eaten; unripe fruits cause a burning sensation in the mouth. Gemsbok is but one of the antelopes that dig up the root from the sand for food and moisture. Porcupines are good at this too, also obtaining roots from soils harder than sand.

The species occurs widespread in the northern parts of South Africa, not in the Western and Eastern Cape or in Mpumalanga but also widespread in several neighbouring countries.

The habitat is deep sand, dune crests and slopes, the plants mostly seen after summer rain. The species is not considered to be threatened in its habitat early in the twenty first century.

The only other Acanthosicyos species in this small African genus of the Cucurbitaceae family also occurs in South Africa. It is A. horridus, commonly known as nara or butterpips. It is more common beyond the South African border but found near the Gariep and in the Richtersveld. The nara is a spiny, leafless shrub that grows 1,5 m tall and spreads widely. It also produces spiky melons, 14 cm in diameter, containing edible pips (Van Rooyen and Van Rooyen, 2019; Williams, 2010; Leistner, (Ed.), 2000; iNaturalist; http://redlist.sanbi.org).