Home » TYPES » Climbers » Abrus precatorius subsp. africanus
Back to Category Overview
Total images in all categories: 11,417
Total number of hits on all images: 6,197,996 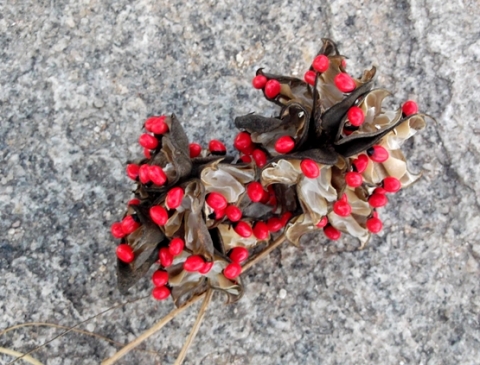 Abrus precatorius subsp. africanus, the lucky bean creeper, is a robust climbing plant with fruits exceeding the flowers in appearance. The allure of the shiny red and black seeds is unfortunately accompanied by high toxicity. When the hard seed cover is broken, such as would happen if the seed is chewed, a toxin called abrin is released.

Still all plant parts are used in traditional medicine for treating a variety of ailments. The seeds are also commonly used as beads and in percussion instruments by musicians. The specific name, precatorius relating to prayer, suggests another use, viz. in rosaries.

The fruits of the lucky bean creeper appear in clusters of triangular pods. The hairy, dark pods open once they are dry during winter or spring, displaying the ovoid red seeds on the pale white insides of the pods. There is a small black spot on the seed where it attaches to the pod.

These seeds remind of those of some Erythrina species, some of which are also called lucky beans (Onderstall, 1984; Wikipedia; Germishuizen and Fabian, 1982).