Home » TYPES » Climbers » Abrus precatorius subsp. africanus
Back to Category Overview
Total images in all categories: 12,068
Total number of hits on all images: 7,363,265 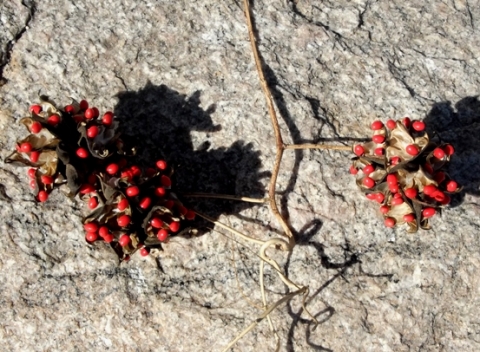 The long, smooth, twining stems of Abrus precatorius subsp. africanus will attach themselves robustly to shrubs and trees that may be growing within reach. The grey-green leaves are pinnate and straight with two rows of tiny, opposite, oblong leaflets on the rachis. There are normally more than 10 leaflets as well as a terminal one.

The small, purple or lilac flowers of the lucky bean creeper grow in short, terminal sprays during spring to autumn.

The species is found in many tropical habitats on earth, including some where it has been introduced and become a notable invader. Still, the literature includes material about the plant’s propagation and cultivation practices.

The South African distribution lies in the provinces North West, Limpopo, Mpumalanga, KwaZulu-Natal and the Eastern Cape. The plant grows in dry woodland at low to medium altitudes. The species is not considered to be threatened in its habitat early in the twenty first century (Pooley, 1998; Onderstall, 1984; Wikipedia; Germishuizen and Fabian, 1982; ResearchGate; http://redlist.sanbi.org).