Home » GENERA D-F » Drimia » Drimia altissima
Back to Category Overview
Total images in all categories: 9,618
Total number of hits on all images: 4,328,765 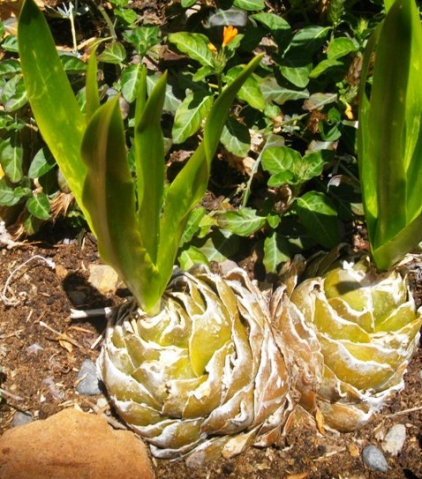 Drimia altissima, the tall white squill or jeukbol (itch bulb) in Afrikaans, is a bulbous perennial with a tall, white flower raceme on a sturdy flowering stem. It reaches about 1 m in height. The green tepal markings resemble those of Albuca. Flowers open for part of a day, usually in the morning only.

The bulb, most of it above-ground and green is large, comprising many overlapping scales that give the plant allure, whether leaves or flowers happen to be present or not. The seasonal leaves are broad, bright green, sword-shaped and angling outwards, nearly erect. Leaves appear after the blooming season, which occurs in spring, sometimes extending into early summer.

The plant is found from the Eastern Cape to central Africa. It is often seen forming small groups in open, sandy patches in habitat.

The earlier generic name Urginea is said to be derived from an eponymous Algerian tribe. The genus is related and similar to Ornithogalum (www.zimbabweflora.co.zw; Germishuizen, 1982; Letty, 1962; Bond and Goldblatt, 1984).