Home » TYPES » Bulbs » Tulbaghia simmleri flower umbel
Back to Category Overview
Total images in all categories: 9,433
Total number of hits on all images: 4,237,165 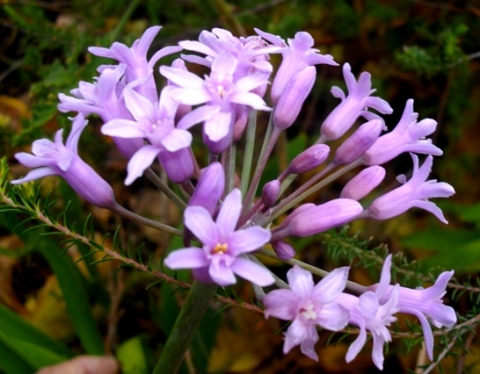 The mauve-pink or lilac flowering Tulbaghia simmleri is the more common form of this plant. It grows a many-flowered umbel-shaped inflorescence on a sturdy, dark green scape above glaucous leaves.

An umbel is a flower cluster in which stalks of nearly equal length spring from a common centre, forming a dome-shape of the spaced flowers. In some flowering species bearing umbels the dome may be almost spherical.

The sweetly fragrant flowers are seen from spring to autumn. The tubular perianth has a longish pedicel. The tepal lobes are about as long as the basal tube. The six tepals, forming the tube in two whorls of three, spread their lobe tips from the flower mouth.

At this corolla mouth there is a short, same-coloured corona, erect and raggedly lobed, around the anthers and stigma (Duncan, 2010; Germishuizen and Fabian, 1982).