Home » TYPES » Bulbs » Tulbaghia simmleri
Back to Category Overview
Total images in all categories: 9,433
Total number of hits on all images: 4,237,299 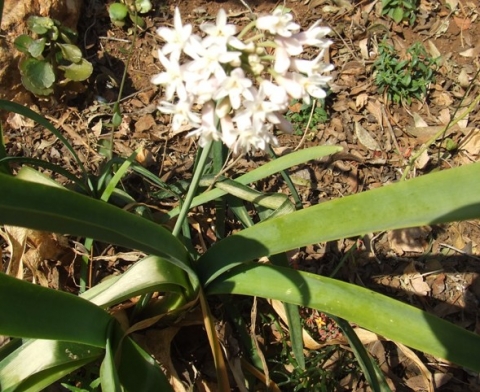 Tulbaghia simmleri grows strap-shaped, grey-green leaves from an underground rhizome. The rhizomes that reaches 5 cm in diameter multiply, allowing the plants to form large, dense clumps. The plants may reach 70 cm in height.

The flower colours include the common pale purple or lilac form as well as the white one in picture. There is also a pink-flowering form that has a white corona.

The species distribution is in Mpumalanga and Limpopo where the plants grow in moist areas. The plant is not considered to be threatened in its habitat early in the twenty first century.

South Africa has about 20 species of Tulbaghia. They are often difficult to identify as there are many differences in plants growing in habitat as well as many hybrids and garden cultivars worldwide. This species used to be called T. fragrans (Duncan, 2010; Germishuizen and Fabian, 1982; www.pacificbulbsociety.org; www.redlist.sanbi.org).