Home » TYPES » Bulbs » Tritonia pallida
Back to Category Overview
Total images in all categories: 10,366
Total number of hits on all images: 5,069,398 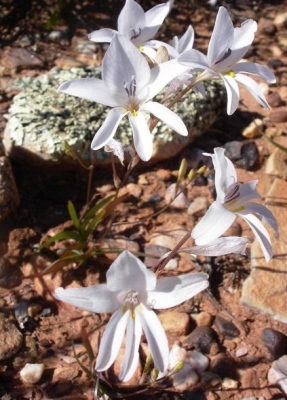 This Little Karoo perennial grows annually from a corm whilst the above-ground parts die down in the resting season. It flowers during late spring and early summer.

It is also found in the southern Cape coastal winter rainfall areas where it grows on sandstone and clayey slopes. The flower colour may also be cream or pale lilac instead of the common white form.

There are two subspecies, both in the Western Cape and one of which (subsp. taylorae) is considered vulnerable early in the twenty first century; subsp. pallida not (Jan Vlok, Klein Karoo Buzz. Veld & Flora, March 2009, pp. 24-25; http://redlist.sanbi.org).