Home » TYPES » Bulbs » Tritonia karooica
Back to Category Overview
Total images in all categories: 9,889
Total number of hits on all images: 4,583,331 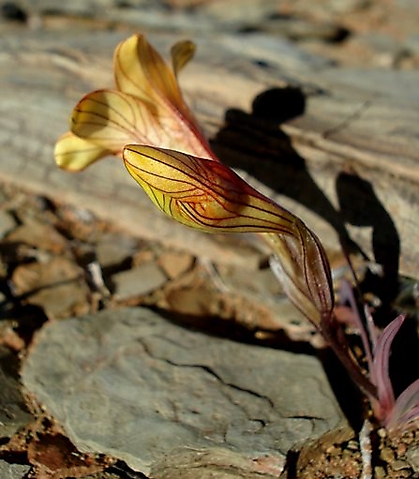 Tritonia karooica is a cormous perennial reaching heights around 8 cm. Plants would be taller if inflorescences did not tend to grow inclined at variable angles.

The shapes of bud and open flower tips contrast in picture. The veins on the open flower are fainter than on the bud.

The species distribution is widespread in the Northern Cape across Bushmanland and the northern Karoo, slightly into the north of the Western Cape.

The plants grow on dry, stony flats. The species is not considered to be threatened in its habitat early in the twenty first century (Shearing and Van Heerden, 2008; iNaturalist; http://redlist.sanbi.org).