Home » TYPES » Bulbs » Tritonia bakeri
Back to Category Overview
Total images in all categories: 9,903
Total number of hits on all images: 4,604,262 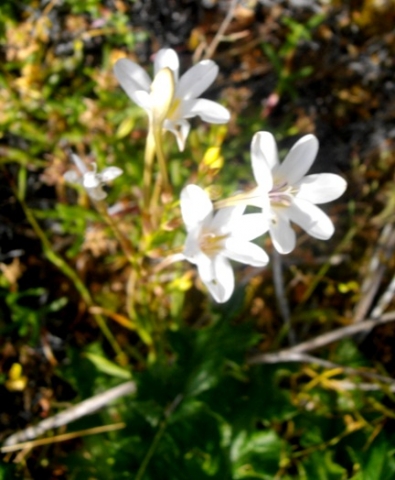 Tritonia bakeri, a cormous perennial, produces its flowers on a stalk as tall as 60 cm. The three leaves grown in winter are narrow, about 3 mm wide. Flower stalks may be branched, carrying up to 20 flowers, several opening at the same time. Small bracts are present at each flower base.

The flower has a long (2 cm) slender tube of tepals with spreading, rounded tips that have dark brown veining on their outer surfaces. The corolla is close to radially symmetrical and cream coloured, sometimes tending to yellow or mauve. Flowers open widely, to about 4 cm in diameter. The stamens are purple while the white style has three tiny stigma branches. Blooming starts in mid-spring until early summer.

The distribution of the plant is the Little Karoo and eastwards into the western parts of the Langkloof. The plant grows in open scrub and on grassy slopes. The species is not considered to be threatened in its habitat early in the twenty first century (Moriarty, 1997; Vlok and Schutte-Vlok, 2010; www.pacificbulbsociety.org; http://redlist.sanbi.org).