Home » TYPES » Bulbs » Strumaria watermeyeri subsp. watermeyeri
Back to Category Overview
Total images in all categories: 11,635
Total number of hits on all images: 6,752,991 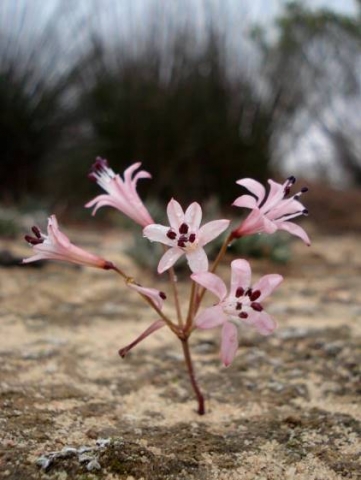 Strumaria watermeyeri subsp. watermeyeri is a small, bulbous perennial growing its annual, above-ground parts to heights around 10 cm to 15 cm. The few, deciduous leaves are prostrate, absent at anthesis (when the flowers are open).

The flowers grow in a hemispherical head on a peduncle marginally shorter in picture than the individual flower pedicels. Two spathe valves, narrowly lance-shaped and membranous or dry and papery are present where the pedicels emerge.

The regular or radially symmetrical flowers are very pale pink, almost white. The pointed tepals spread in a funnel-shape, their upper parts (above halfway) curve out. The six purple-brown anthers on long, free filaments are exserted far above the corolla mouth. Flowering happens in about the second half of autumn.

The small, nearly round fruit capsule becomes papery; the ovoid seeds are fleshy.

The subspecies distribution in the Northern Cape is small, near Nieuwoudtville and on the Bokkeveld Escarpment from the Vanrhyns Pass to the Koebee Pass.

The habitat is in dry montane fynbos on sandstone sheets in shallow, sandy pans. While the plant is rare, its population in habitat is considered to be stable early in the twenty first century (Bond and Goldblatt, 1984; iNaturalist; http://redlist.sanbi.org.za).