Home » TYPES » Bulbs » Strumaria gemmata flower
Back to Category Overview
Total images in all categories: 11,662
Total number of hits on all images: 6,774,769 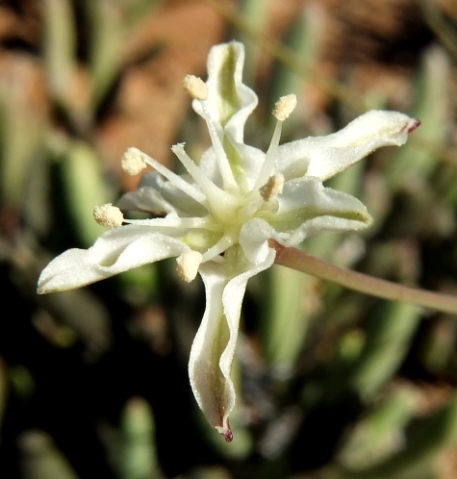 The individual flower of Strumaria gemmata is creamy white here; it may also be lemon yellow. The two whorls of three tepals each of this (monocot) perianth are similar in appearance, spreading wide. The petal margins, upturned and wavy, are paler than the rigidly straight central axis of the tepal.

A feature of the species is the small, shiny white swelling at the base of the style, falsely promising nectar. This mimicry hoodwinks hungry insects that discover their mistake too late when the pollination requiring flower had already had its way with them. The specific name, gemmata, meaning bejewelled in Latin, probably refers to this value item. The name is apt: jewellery serves ulterior motives. Freud could have had a field day.

The six stamens spreading around the erect style are joined below the basal style swelling. The fluffy anthers are cream-coloured, ready for offloads upon itinerant pollen couriers (Vlok and Schutte-Vlok, 2010; Wikipedia).