Home » TYPES » Bulbs » Strumaria bidentata
Back to Category Overview
Total images in all categories: 12,068
Total number of hits on all images: 7,360,615 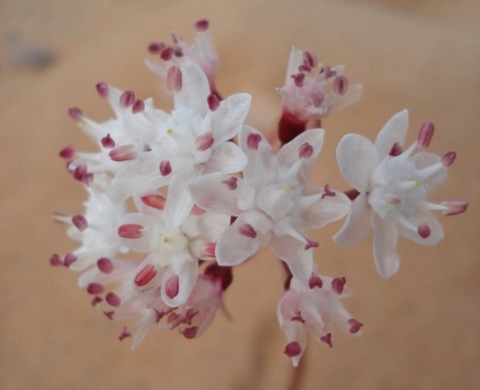 Strumaria bidentata is a rare plant, an autumn flowering geophyte. The plant is one of 24 species in a less known genus of the Amaryllidaceae family. Strumaria flowers drop off when withered, unlike those of Hessea species, another genus of the family with similar flowers.

The distribution of S. bidentata is limited to a small and remote area in the Richtersveld and on the Namibian side of the Gariep River, near the riverbank and close to the sea. What grows in the Namib Desert surely qualifies as a true desert flower. The plant grows in sandy desert soil among plentiful loose pebbles.

Two rounded or tongue-shaped leaves with red margins stand erect from the ground in winter after the autumn flower has disappeared (Williamson, 2010; iSpot; www.rareplants.co.uk).