Home » TYPES » Bulbs » Stangeria eriopus
Back to Category Overview
Total images in all categories: 11,544
Total number of hits on all images: 6,626,006 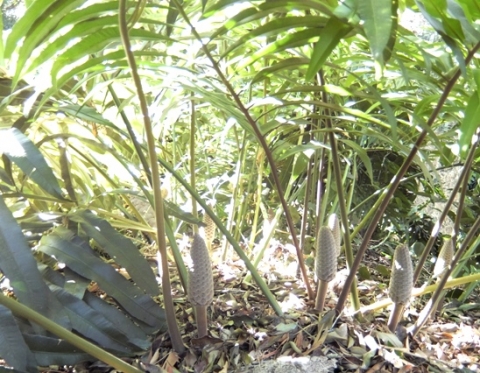 Stangeria eriopus, commonly Natal grass cycad or in Afrikaans bobbejaankos (baboon food), is a cone-bearing, fern-like plant of the Stangeriaceae family related to the cycads. The plant grows slowly and lives long.

Stangeria is a monotypic genus, i.e. there is only one species in the genus. The genus now forms part of the Zamiaceae family, previously also in a temporarily monotypic family, the Stangeriaceae.

Leaves and cones grow from a turnip-shaped or carrot-shaped (underground) tuber. The tubers are dug up and sold on the traditional medicine market, used in treating a variety of ailments

This curious South African plant grows along the east coast of South Africa from Bathurst in the Eastern Cape to Khosi Bay in KwaZulu-Natal, as well as across the border in Swaziland and Mozambique.

The habitat is grassland and evergreen forest close to the sea, but away from the salt spray, in shade or sun. The forest and grassland forms may not be quite identical anymore. The species is considered to be vulnerable in its habitat early in the twenty first century (Coates Palgrave, 2002; Van Wyk and Gericke, 2000; Van Wyk, et al, 1997; Wikipedia; www.pacsoa.org.au; http://redlist.sanbi.org).