Home » TYPES » Bulbs » Sparaxis tricolor
Back to Category Overview
Total images in all categories: 11,921
Total number of hits on all images: 7,168,623 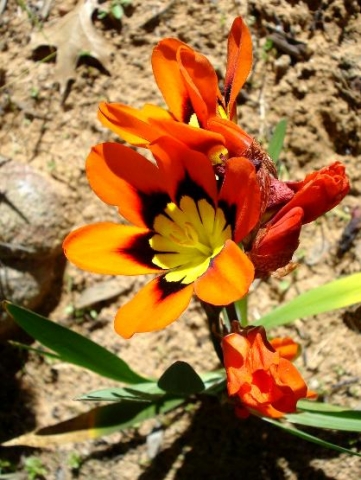 Sparaxis tricolor, the harlequin flower, is a cormous perennial. It is summer deciduous with annual above-ground growth. The flowering spike reaches heights of 10 cm to 30 cm with sword-shaped leaves arranged in a fan. The leaves have prominent midribs.

The flowers are radially symmetrical with a yellow cup at the base, fringed with black. The largest part of each tepal is orange-red to its rounded tip, completing the three coloured appearance referred to in the specific name. The specimen in picture has a bit wider black fringes on the tepals than often seen. Hybridisation happens much in nature among Sparaxis plants; more so in horticulture. Flowers may reach 4 cm in diameter. The three stigma branches are visible in the centre, the larger yellow anthers curving in around them. Flowers appear in early spring.

The species distribution is small, only occurring in the Nieuwoudtville area in open, stony places where it is moist in the plant’s growing season.

This species has escaped into Californian and Australian countryside from gardening exports (Manning, 2009; iSpot; Wikipedia).