Home » TYPES » Bulbs » Sparaxis grandiflora subsp. acutiloba
Back to Category Overview
Total images in all categories: 12,087
Total number of hits on all images: 7,392,860 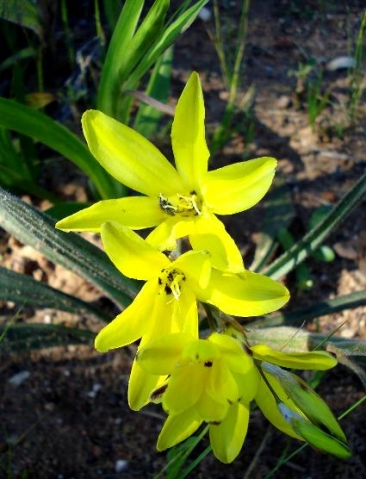 S. grandiflora, the species overall, is a summer deciduous, perennial geophyte, i.e. it produces new above-ground growth every winter from its spherical corm of 1,3 cm in diameter, covered in a fibrous coating. The leaves are sword-shaped with central midribs. The flowers grow in a spiralling spike on a stem that doesn’t branch. The species does not grow axillary cormlets on the stem as are found on some other Sparaxis species.

This subspecies, S. grandiflora subsp. acutiloba with its yellow flowers, is the most commonly cultivated of the four. Its tepal tips are narrower than some of the others, probably giving rise to the subspecies name. There are sometimes dark markings at the tepal bases. This plant grows in the Olifants River Valley, a distribution well restricted within that of the species as a whole.