Home » TYPES » Bulbs » Sparaxis elegans
Back to Category Overview
Total images in all categories: 12,087
Total number of hits on all images: 7,392,944 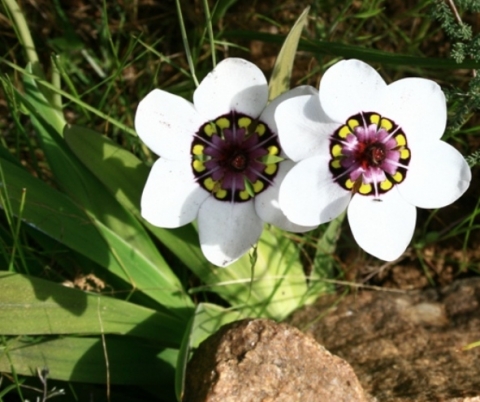 Sparaxis elegans, commonly the pale harlequin flower and in Afrikaans the spogfluweeltjie (little boast velvet), is a cormous perennial of the Iridaceae family that reaches heights in its annual growth from 10 cm to 20 cm. The few erect leaves are sword-shaped.

The corolla is a shallow dish of spreading tepals marked by an attractive circular band, black with yellow markings across the bases of all six tepals and purple inside this band. Outside the band the flower colour is salmon pink or white, occasionally more colour options. The anthers are coiled and purplish.

S. elegans is found around Nieuwoudtville, the Bokkeveld Plateau and the Koebee Valley in a small distribution. Some other Sparaxis species endemic to South Africa also grow in this general region.

The plants grow in shale and clayey soils in renosterveld. The species is considered to be near threatened in its habitat early in the twenty first century due to crop cultivation (Manning, 2009; http://redlist.sanbi.org).