Home » GENERA G-H » Hesperantha » Hesperantha coccinea flowers
Back to Category Overview
Total images in all categories: 9,569
Total number of hits on all images: 4,299,726 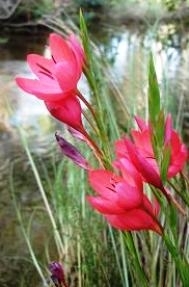 Pink or scarlet flowers grow in a spiralling spike. The corolla tubes are straight, the bracts behind them soft-textured. Flowering happens from before midsummer to after midautumn.

The species distribution is in the east of South Africa from the Eastern Cape to Limpopo, as well as Zimbabwe. The habitat is river banks in mountainous regions. The species is not considered to be threatened in its habitat early in the twenty first century.

This plant is widely used horticulturally, also for cut flowers. Propagation is easy by dividing clumps of rhizomes during the winter period. It is frost tender, but grows vigorously in favourable circumstances (Manning, 2009; http://redlist.sanbi.org).