Home » TYPES » Bulbs » Sansevieria pearsonii
Back to Category Overview
Total images in all categories: 11,923
Total number of hits on all images: 7,173,611 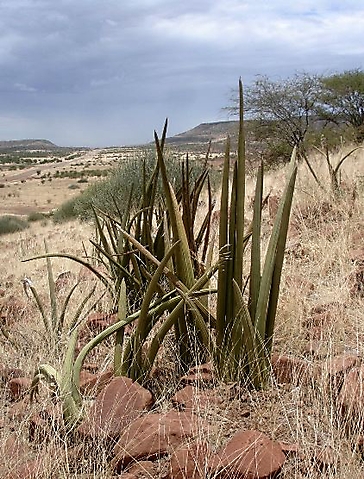 This Sansevieria pearsonii plant growing in rocky grassland was seen where Kaokoland meets Damaraland in northern Namibia, a part these days referred to as the Kunene Region. The plant is in Afrikaans sometimes called renostergras (rhino grass).

Absorbing features of the vegetation of this semi-desert landscape include gnarled trees, diverse annuals, grasses, succulents and more. Many plants here store provisions for hard time in leaves, stems and roots, or duck the extreme seasons in seed form after flowering to reappear as new plants only in the next happy season.

S. pearsonii stores its stash in the thick, cylindrical leaves with grooved surfaces, as well as in its underground rhizomes.

Once adapted for life in any locality, conditions are pretty normal for plant or animal, having mastered the challenges of its particular life situation. The "hardship" component is only identified as strange, testing or awe-inspiring by visitors from afar, or by people from the human settlement nextdoor, adapted to something else.

The species distribution of S. pearsonii in South Africa is in KwaZulu-Natal, Mpumalanga and Limpopo; beyond the border it is also found in Angola, Botswana, Zimbabwe, Mozambique, Tanzania and Swaziland, apart from Namibia.

The habitat is often bushveld in warm, seasonally dry regions. The species is not considered to be threatened in its habitat early in the twenty first century (Smith, et al, 2017; iNaturalist; http://redlist.sanbi.org).