Home » TYPES » Bulbs » Sansevieria hyacinthoides
Back to Category Overview
Total images in all categories: 9,900
Total number of hits on all images: 4,602,006 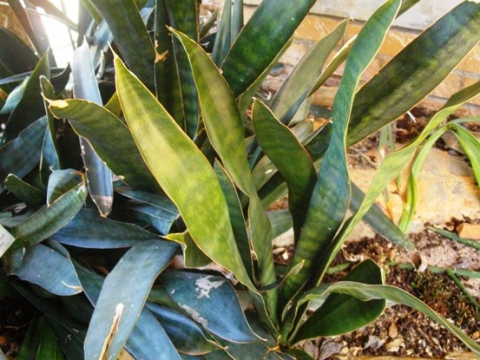 Mother in law’s tongue or bowstring hemp are some of the common names acquired by Sansevieria hyacinthoides. It has robust rigid erect strap-like leaves. When in flower the plant might be thought to stand a chance of also impressing with its greenish white raceme of clustered tubular flowers.

The flowers appear only once on each outgrowth, the leaves giving the lasting impression. The little red berries that follow later also don’t quite make it in the popularity stakes. Only the moth pollinators watch out for flowering time of S. hyacinthoides, which is from November to March in its Eastern Cape (and more northerly) distribution.

The plant is placed among the bulbs for its robust rhizomes that spread into clumps. It may as easily have been under succulents for its moisture storage, or as a perennial herb. Categorization of living things brings about much borderline uncertainty among classes sometimes artificial to nature. The transition areas, the shades of grey limit order, increasing complexity.

Mother in law's tongue has interesting uses, including as rope fibre and as an air purifier that removes toxins from the air. It can thus be used in dealing with sick building syndrome. The leaves produce oxygen at night, making it a good indoor and bedroom plant.

This plant is an invader in some south-western parts of the USA (Wikipedia; Bond and Goldblatt, 1984).