Home » TYPES » Bulbs » Sansevieria cylindrica
Back to Category Overview
Total images in all categories: 9,120
Total number of hits on all images: 4,074,893 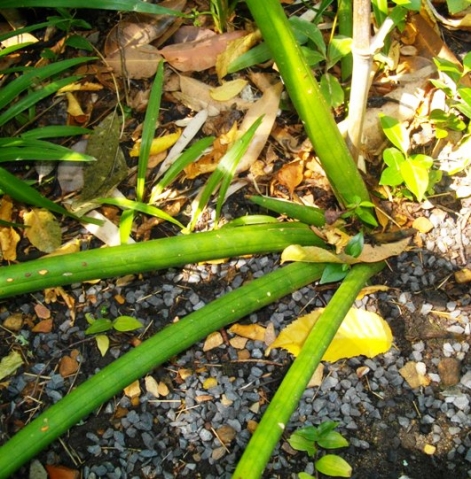 Sansevieria cylindrica, commonly referred to as the African spear, is not a South African plant, being indigenous to Angola although seen locally in horticulture. In fact, this plant is deservedly established in gardens in Europe, the USA, Australia and probably more widely. This base of a young leaf rosette was seen in the Stellenbosch University Botanical Garden.

The ribbed, cylinder-shaped leaves become 3 cm in diameter low down, tapering gradually to their pointed tips. These leaf spears may reach more than 1 m in height. They are smooth and hairless, grey-green in colour, sometimes with random paler patches. The specific epithet suggests the cylindric leaf-shape, rather than the clearly defined inner and outer leaf surfaces common among Sansevieria species. Particularly S. pearsonii the South African plant that resembles S. cylindrica with its nearly cylindrical leaves, grows its leaves erectly, arranged in a fan shape.

The creeping rhizomes by which the plant spreads add more leaf rosettes to form a seemingly small colony, although they are all physically connected. These rhizomes are sometimes underground, sometimes above, making them stolon-like.

The flowers grow in an erect spike. They are greenish white, tinged with pink, narrowly tubular in shape, about 3 cm in length. The species is said to flower on younger plants than many other Sansevieria species and is also long-lived (Wikipedia; www.plantsrescue.com).