Home » TYPES » Bulbs » Sansevieria aethiopica
Back to Category Overview
Total images in all categories: 9,889
Total number of hits on all images: 4,583,330 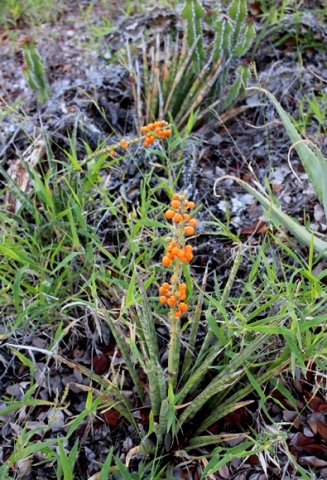 The cluster of rigid leaves are basal, erect and out-curving. The long, strap-like leaf is U-shaped in cross-section, strongly channelled. The slightly rough, hairless, hard blade surface is covered in scattered whitish blotches on a dark-green background. The red-brown leaf margins are entire.

Slightly fragrant flowers grow on a short, study, erect peduncle with sterile bracts scattered on its lower half. The tubular flowers, long and thin in bud, grow in clusters up the stalk. They open at night. The curled back perianth lobes of open flowers are cream, greenish white or greenish mauve. Flowering happens in spring to midsummer. The fruits in picture are globose orange berries.

The species distribution is widespread in the eastern parts of South Africa, as well as in southern Africa north of the border. The habitat is rocky ridges, bushveld and arid grasslands, often in the shelter of woody plants. The species is not considered to be threatened in its habitat early in the twenty first century (Smith, et al, 2017; Van Wyk and Malan, 1997; iNaturalist; http://redlist.sanbi.org).