Home » TYPES » Bulbs » Raphionacme velutina
Back to Category Overview
Total images in all categories: 9,385
Total number of hits on all images: 4,216,554 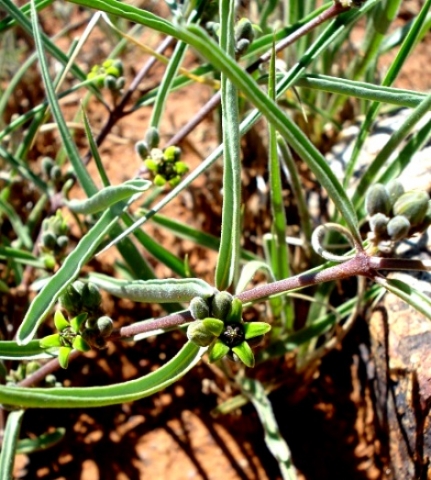 Raphionacme velutina is a small, much-branched perennial. The stems and leaves are densely covered in short, velvety hairs. They exude a milky latex from surface damage. The specific name of velutina (Latin) indicates this velvety feature.

The stems grow from an underground tuberous rootstock. The leaves are simple, narrowly ovate and folded in along the whitish to pale brown midrib. Leaf colour is grey-green to blue-green. Leaves taper to pointed or rounded tips and have entire margins.

The distribution of this plant lies in the Northern Cape, the Free State and North West, as well as in Lesotho, Botswana and Namibia.

The plants grow in bushveld and grassland. The species is not considered to be threatened in its habitat early in the twenty first century (Germishuizen and Fabian, 1982; http://redlist.sanbi.org).