Home » TYPES » Bulbs » Raphionacme hirsuta flowers
Back to Category Overview
Total images in all categories: 11,779
Total number of hits on all images: 6,931,996 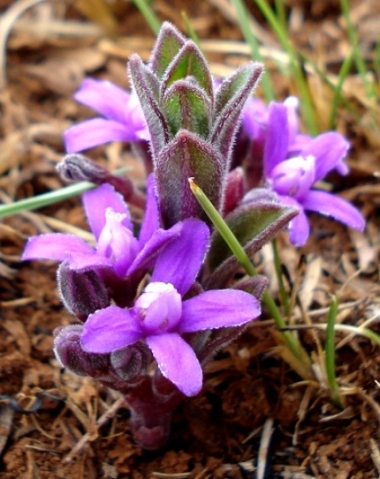 The new growth on this Raphionacme hirsuta plant shows the hairiness that brought about the specific name of hirsuta, meaning hirsute or hairy. Older leaves become larger and paler, losing the hairiness and may develop wavy margins. The ovate leaves taper to acute tips. The leaf margins are entire and purple, as is the midrib.

The five-lobed corolla of the flower is pinkish purple, the lobes oblong with rounded tips and whitish, fringed margins. The corona lobes in the centre are white and folded in.

The underground fleshy tuber of this species becomes very large. This caudex is sometimes dug up and used as yeast, also in brewing an alcoholic beverage called skokiaan; the resemblance to the word shock not being entirely out of place. The plant is sometimes called khadiwortel (khadi root), a name it shares with several mesembs from the genus Khadi.

The photo was taken north of Dullstroom during October (Manning, 2009; Van Wyk and Gericke, 2000; iSpot).