Home » TYPES » Bulbs » Ornithoglossum vulgare
Back to Category Overview
Total images in all categories: 11,104
Total number of hits on all images: 5,772,485 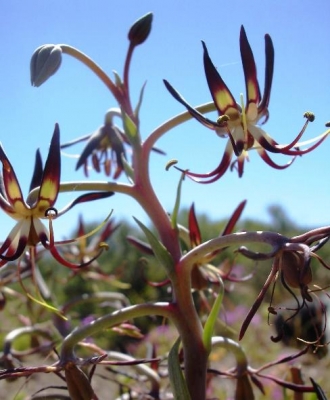 This plant is poisonous to livestock, as are others of the genus. The common Afrikaans name of slangkop (snake's head), may refer to the arched manner in which the flower pedicel arches, or to the plant's toxicity. Some Urginea species, also toxic, with inflorescences that may also resemble snake heads, are also called slangkop (Vlok and Schutte-Vlok, 2010; www.pacificbulbsociety.org).

The common names conferred by lay observers on plants and animals, often convey interesting observational species details. People don't have to be academics to observe accurately. Some rural people with limited schooling display great versatility and ingenuity in their descriptive powers. Still, these names are quite unstable in their evolution as semantic phenomena, an instability shared with so many living things on earth, including the botanical names of plants! The scientific nomenclature is indispensable, even to amateurs dabbling in a little more than the most cursory forms of botanising.