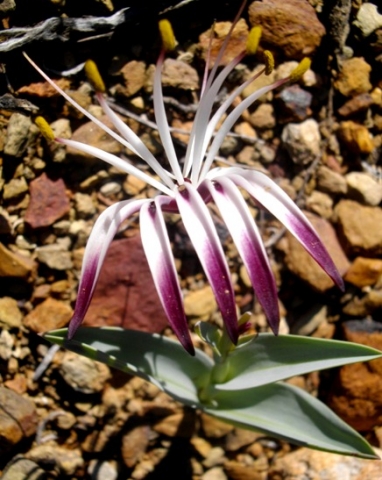 Previous
Image 6 of 18
Next

Ornithoglossum undulatum is a cormous perennial growing to 20 cm. Descriptive common names for this plant include snake lily or poison onion; in Afrikaans slangkop (snake head).

Two to four channelled blue-grey leaves of up to 10 cm in length clasp the stem. Ornithoglossum leaves are poisonous, known to cause stock losses. The leaves in this picture taper smoothly and elegantly to sharp tips. They have entire margins that curve neatly upwards, forming a boat-shape.

The specific epithet undulatum relates to the better known wavy or undulating leaf form of the species. The curved leaves of the alternative form may close more, bringing their margins together as well as recurving towards the leaf tips.

This plant belongs to a small genus of 8 southern African and tropical African species that form part of the Colchicaceae family.

The geographical distribution of the species is large. It grows in southern Namibia, the Richtersveld and Namaqualand in the west of the Northern Cape, across the inland parts of the Western Cape, the Karoo and Little Karoo, extending into the west of the Eastern Cape.

The habitat is rocky slopes and karoid plains in clayey soils among succulent and scrubveld. The species is not considered to be threatened in its habitat early in the twenty first century (Vlok and Schutte-Vlok, 2015; Shearing and Van Heerden, 2008; Bond and Goldblatt, 1984; iNaturalist; http://redlist.sanbi.org).