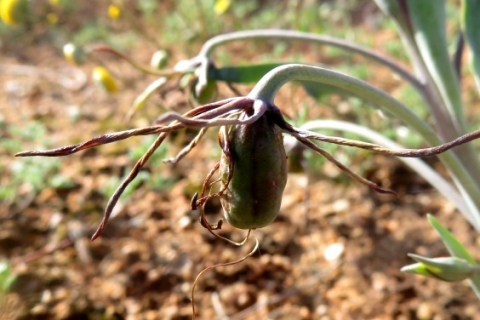 The fruit of Ornithoglossum parviflorum var. parviflorum hangs heavily from its sturdy pedicel, a bit of a burden, more an achievement celebrated in subdued manner, like children in most cases.

The greenish cylinder has an about truncated tip and slightly ribbed sides. When ripe, the three segments of the capsule will split longitudinally. In picture, the capsule still has a couple of style branches at its tip, while the six dry and twisted tepals persist at the back, as do a couple of dry stamens.

Only the stalk and the capsule appear robust and functional at this stage, the rest irrelevant like redundant parts shed from a spacecraft, purposefully en route to its goal and unconcerned with whatever is of no further use (Williamson, 2010; Bond and Goldblatt, 1984; iNaturalist).