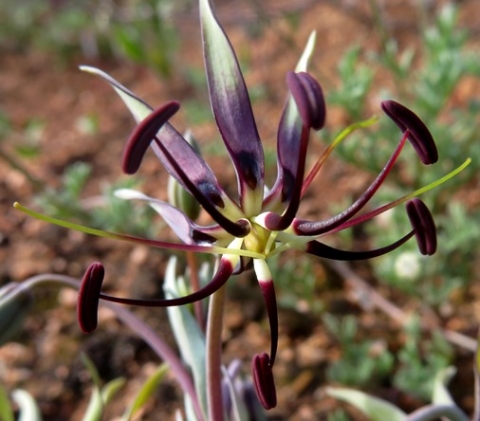 The flower of Ornithoglossum parviflorum var. parviflorum has six narrow tepals that are free and curve back, tapering to acutely pointed tips. The upper part of the tepal is dark purple and shiny. The base of the tepals in picture are white as are the lowest parts of the filaments.

The filaments are swollen at the base, housing the hollow nectaries found in Ornithoglossum flowers. The biggest parts of the tapering filaments are dark purple and curving, holding their slightly more reddish-purple anthers by an attachment in the centre of the anther. The anthers are oblong, slightly curved and lobed.

Three thread-like style branches, longer and straighter than the stamens, emerge from the top of the superior ovary in the flower centre. These styles are tricoloured in picture, white, maroon and green sections of roughly equal length as if flower world also needs a flag of some sort. The stigma at the style tip is tiny. The ovary is ellipsoid in shape and beige in colour.