Home » TYPES » Bulbs » Ornithoglossum parviflorum var. parviflorum
Back to Category Overview
Total images in all categories: 11,110
Total number of hits on all images: 5,778,146 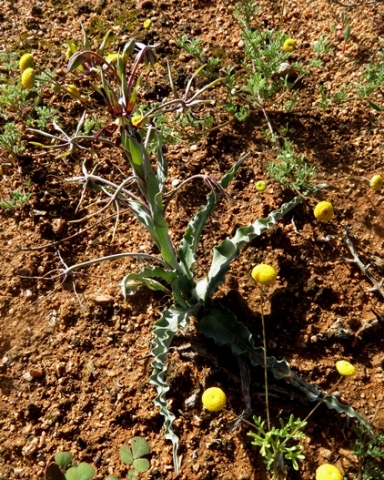 Ornithoglossum parviflorum var. parviflorum, one of the poisonous snake lilies, is a cormous perennial reaching heights from 4 cm to 20 cm. The deep-seated corm, some Ornithoglossum corms may be 80 cm deep in the soil, has an underground sheathe around its long neck.

There are two varieties of O parviflorum: the one described here and var. namaquense, also a small plant bearing large fruit. Both grow in the west of the Northern Cape and the northwest of the Western Cape, in Namaqualand from the Richtersveld to Worcester in the western Karoo. Var. namaquense is less seen and possibly occurring more to the north of this distribution.

The habitat is mainly succulent Karoo and fynbos, the plants found on stony slopes in sandy, often alkaline soils. The species overall is not considered to be threatened in its habitat early in the twenty first century.