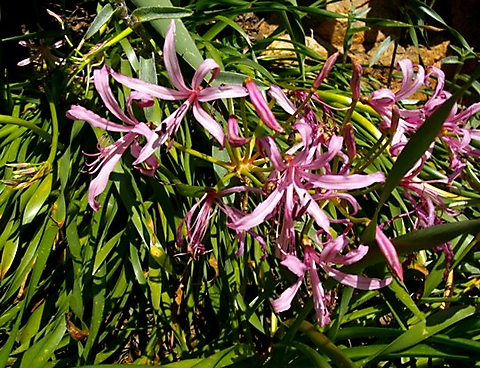 Nerine is an Amaryllidaceae genus of deciduous or evergreen, bulbous perennials. The bulbs are fleshy-scaled in parchment-like coverings, becoming from 2 cm to 10 cm in diameter.

From two to eight glabrous leaves are borne, thread-like to strap-shaped or channelled and often succulent. They are distichous, usually present at flowering, rarely arriving afterwards.

The flowers grow in a spherical or hemispherical umbel. There are from 1 to 75 of them on a solid scape or peduncle of 12 cm to 90 cm long. The scape is variably compressed and erect or nearly so. Umbels may be up to 28 cm in diameter. More than one inflorescence may grow from a bulb in the same season. The stalked umbel may persist on the plant, or the peduncle may break off at ground level when the fruits are ripe.

There are two lanceolate or ovate and variously coloured spathe bracts at the peduncle tip. These spathe bracts envelop the buds before the flowers open. Flower pedicels are from 9 mm to 125 mm long, about equal and smooth or hairy.

The flowers are nearly radially symmetrical to strongly laterally symmetrical, i.e. from nearly actinomorphic to strongly zygomorphic, sometimes funnel-shaped to often flaring widely. Tepal colours range from white through shades of pink to reds including scarlet and crimson. The tepal bases are fused in a short tube, the tepals variably shaped and sized, from 6 mm to 65 mm long, their tips acute.

There are six stamens emerging from the tepal bases, exserted or not. Their filaments are joined at the base, sometimes cohering. The globose ovary is inferior, the fruit a capsule. The fleshy seeds are green, sometimes with some maroon, globose to ovoid in shape.