Home » TYPES » Bulbs » Nerine laticoma subsp. laticoma
Back to Category Overview
Total images in all categories: 12,068
Total number of hits on all images: 7,360,807 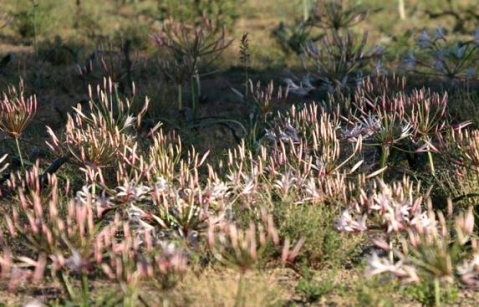 Nerine laticoma subsp. laticoma is a deciduous, summer growing geophyte. Above-ground annual plant parts reach heights around 20 cm to 35 cm from a deep-seated, globose to ovoid bulb of up to 7 cm in diameter. The white bulb grows in layers of dark brown outer tunics, the distinct bulb neck borne underground, up to 4,5 cm long.

The subspecies is widely distributed in southwestern Africa from the Northern Cape, Free State and the provinces north of the Vaal River, as well as in neighbouring countries from Namibia to Angola and Zimbabwe. Flower variations, e.g. tepal size and the degree of their spreading and recurving, are associated with geographical parts of the overall species distribution.

The habitat is dry inland flats where the plants grow in deep, red, sandy soil. The subspecies is not considered to be threatened in its habitat early in the twenty first century. The plants often form large stands. The photo was taken in the Kgalagadi Transfrontier Park during February.