Home » TYPES » Bulbs » Nerine laticoma subsp. laticoma in flower
Back to Category Overview
Total images in all categories: 11,769
Total number of hits on all images: 6,918,678 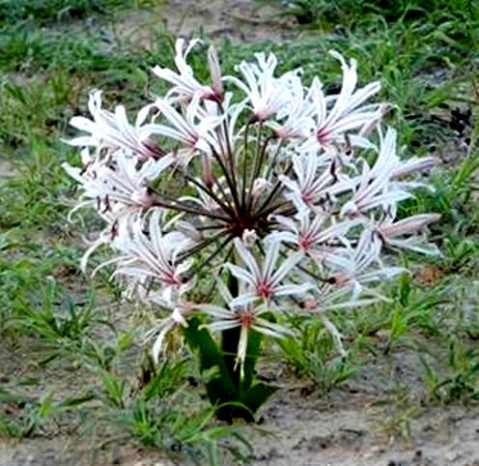 The flowers of Nerine laticoma subsp. laticoma grow in a large, umbel-shaped inflorescence, bearing from 5 to 75 lily-like flowers. The umbel is hemispherical to almost spherical, from 15 cm to 28 cm in diameter.

The bright green scape is smooth and laterally compressed, growing from between the youngest leaves. It becomes up to 30 cm long, 1 cm wide. When the fruits are ripe the stalk breaks off at the base, allowing the wind to make the rounded, seed-rich umbel roll over the countryside on a seed dispersal journey.

The individual flower pedicels, from 4,5 cm to 12,5 cm long and green, sometimes slightly hairy, radiate out from the tip of the scape. There are membranous bracts, ovate in shape around the bunch of pedicels where they emerge from the top of the scape, the peduncle or stalk.

The sometimes translucent white or pale pink flowers are zygomorphic, i.e. not radially symmetric. The six tepals flare widely, the corolla tube straight or funnel-shaped, up to 6 mm long. The variable tepals are lanceolate to oblanceolate, from 3 cm to 6,5 cm long and 4 mm to 7 mm wide. The tepals are channelled on the inside, keeled outside; a greenish central longitudinal line is present on the inside surface, darker near the tepal bases in the photo. The tepals ascend, barring one or two that may be positioned below the stamens.

The stamens curve up before their tips and are sometimes exserted; the pollen on their anthers cream, later black. The flowers are short-lived, appearing from midsummer to early autumn. The globose to irregularly shaped, fleshy seeds are produced in papery capsules (Duncan, et al, 2016; www.plantbook.co.za).