Home » TYPES » Bulbs » Nerine appendiculata
Back to Category Overview
Total images in all categories: 11,905
Total number of hits on all images: 7,155,631 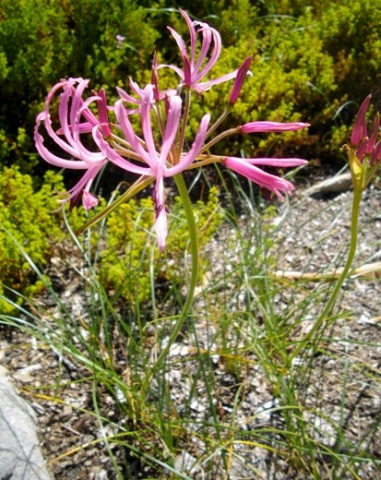 Nerine appendiculata, the grass-leaved nerine, is an evergreen, bulbous perennial reaching up to 90 cm when in bloom. The long, narrow leaves are linear and channelled.

The pink flowers grow in many-flowered hemispherical heads on hairy pedicels from a long, solid scape. A long and narrow, pointed bract is visible in the photo at the base of the flowerheads. The flower shape is irregular or zygomorphic, the narrow tepals curving back, crinkly along the margins in their upper parts. The stamens are unequal, of two lengths, with white lateral appendages at the base that gave the species its name. Flowering happens in summer and autumn.

The species distribution is in the inland parts of the Eastern Cape and in south-western KwaZulu-Natal, where it grows in marshy grassland at elevations up to 1800 m. The species is not considered to be threatened in its habitat early in the twenty first century (Pooley, 1998; Manning, 2009; www.redlist.sanbi.org).