Home » TYPES » Bulbs » Micranthus junceus
Back to Category Overview
Total images in all categories: 11,662
Total number of hits on all images: 6,774,652 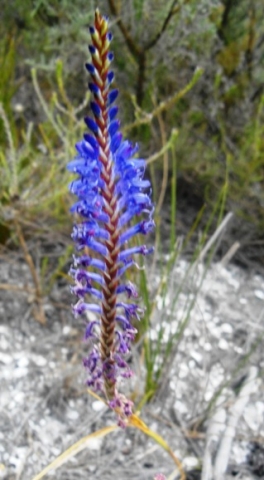 Micranthus junceus, the vleiblommetjie in Afrikaans, is a cormous perennial reaching heights from 25 cm to 45 cm. It is a member of the Iridaceae family, the genus consisting of three species, all found in the fynbos.

The leaves are quill-like or terete (cylindrical) and hollow. The plant produces a dense two-ranked spike of neatly aligned, small blue flowers in spring and summer.

M. junceus is found from Clanwilliam to Riversdale in the Western Cape and slightly into the Northern Cape, a South African endemic. Its habitat is sandy flats and slopes moist in winter. The species is not considered to be threatened in its habitat early in the twenty first century (Manning, 2007; Bond and Goldblatt, 1984; www.pacificbulbsociety.org; http://redlist.sanbi.org).